BETRAYALS tells the story of Benedict Arnold, the American general and war hero who fought the British in the War of American Independence (ie the American Revolutionary War) and then changed sides. He didn’t just desert to the British side: he attempted to betray the key strategic fort where he was in command and was only prevented from doing so when the British officer to whom he had handed the plans of the fort’s defences, Major John André, was captured by chance by sentries and the plans were found concealed in his boots. Arnold had to run to the British lines to avoid being discovered; Major André was left to hang.

This is a tale that has fascinated me since I first encountered it while I was at school. I find lies and betrayal very rich sources of drama and I built betrayals of different sorts into this play. A key figure is Peggy Shippen, the British-sympathising young woman for whom Arnold falls when, having been badly wounded in battle, he is given the post of Military Governor of Philadelphia. It is in Philadelphia that he encounters the ruthless and vindictive side of American patriotism and when he himself falls victim to the endemic in-fighting going on in American politics, he is just ripe to be approached by the British with an offer of financial security if he will work in secret for them.

BETRAYALS was first performed at the Robinson Theatre, Hills Road Sixth Form College, Cambridge, in 1996. It was something of a spectacular, with some excellent costumes and very effective live action.

RUTH:  Yes, sir. The gentlemen were sheriff’s officers. They’ve carted her off.

PEGGY:  Why didn’t you come and tell me?

RUTH:  I didn’t think you’d want to be disturbed, ma’am.

ARNOLD:  As you wish.

PEGGY:  Ruth, don’t you ever do something like that again.

(Exit ARNOLD and PEGGY. RUTH tidies up the tea things before going, a hint of satisfaction on her face. We switch to REED and THOMAS, who are interrogating BECKY.)

REED:  Did you write them?

REED:  We know you did: we have witnesses.

REED:  In Philadelphia I always have witnesses. These letters are treason.

BECKY:  Those letters are private.

REED:  So they are yours? (Turns to a pocket book.) I have a record here of your movements and transactions during the occupation. Do you want me to read it to you?

BECKY:  Then you’ve made it up.

REED:  Your father traded freely with the British in New York. We have records of shipments, with dates, contracts, even the log of one of the voyages.

BECKY:  You have been busy.

BECKY:  Why am I here, Mr Reed? Am I under arrest?

REED:  You are charged with treason against the United States in that you did conspire to aid and abet their enemies.

BECKY:  I am no ciizen of the United States.

REED:  Miss Noble, you are, I hope you agree, a citizen of the Commonwealth of Pennsylvania?

REED:  The Pennsylvania Assembly, in which I have the honour to sit, formally declared its adhesion to the United States three years ago. Since then you, Miss Noble, have been a United States citizen whether you like it or not.

BECKY:  What are you going to do? Pick on my poor father again? Is that how you heroes carry on? Bullying women and old men?

REED:  Your father, Miss Noble, will face charges in due course. For the moment my main concern is with you.

FRANKS:  Congressman, a word with you, if you please.

REED:  Major Franks, you are interrupting me.

FRANKS:  The Governor’s compliments, Congressman, and he would be obliged for a word with you at the earliest opportunity.

REED:  You may tell the Governor I would be pleased to call in on him this afternoon. Now if you’ll excuse me…

REED:  Major, are you trying to impede me in the course of my duties?

FRANKS:  The Governor would be very grateful, sir, for your immediate attendance.

(The SOLDIERS have worked their way round and are standing on either side of REED.)

REED:  Indeed he shall, Major. (To THOMAS.) Keep her here till I come back.

(FRANKS and the SOLDIERS escort REED over to where ARNOLD awaits them.)

ARNOLD:  Mr Reed, what in heaven’s name have you done with Miss Noble?

ARNOLD:  I have not told you to sit, sir!

(REED makes no move to get up.)

REED:  What exactly is your interest, Mr Arnold?

FRANKS: (Correcting him.)   Your Excellency, Congressman.

ARNOLD:  Where is she?

REED:  She is being held at my lodgings. On a charge of treason.

REED:  That’s for the judge to hear, your Excellency.

ARNOLD:  Congressman, you may think it serves the honour of this nation to proceed in this high-handed and bullying – yes, sir, bullying – way against a young woman, but I can assure you I take a very dim view of your conduct, sir.

REED:  You mean it ain’t legal? Is that what you’re saying?

REED:  Then I don’t care how you regard it. These are legal proceedings, your Excellency. And just at the moment, you are impeding them. I would warn you not to impede them further. I think you have some experience of courtrooms: don’t get mixed up in them again. Good day.

(REED returns to his place opposite BECKY.)

REED:  Now. We shall resume.

ARNOLD:  We need a good lawyer.

CLINTON:  It’s out of the question.

ANDRE:  You want me to offer him five?

CLINTON:  I’m not going to haggle

ANDRE:  Ten thousand pounds for winning the war. I’d say it was a bargain.

CLINTON:  And what do I tell London?

ANDRE:  Tell them the truth. Arnold’s worth it.

CLINTON:  It won’t do, John. We’ve had Yankee generals coming over before. They didn’t ask for ten thousand pounds.

ANDRE:  Not of Arnold’s calibre. As a fighting general, he’s better than Washington.

CLINTON:  All right. I write to London, to the Secretary of State, and I say, “By the way, I’m giving him ten thousand pounds, probably just as a first instalment”, and his Lordship writes back to me to say, “Oh, really? Are you sure it’s Arnold out there?” Well? Are you?

ANDRE:  Of course I’m sure.

CLINTON:  How? Have you met him?

ANDRE:  We correspond through an intermediary.

CLINTON:  If you want ten thousand pounds, I want his name.

ANDRE:  His name is Joseph Stansbury. He is a merchant from New York. He poses as my commercial agent. I correspond under the name Anderson.

CLINTON:  And how do you correspond?

CLINTON:  What do you use?

ANDRE:  Bailey’s Dictionary. We use a system of numbering to denote page, column, line and so on.

CLINTON:  So your messages consist only of figures?

CLINTON:  No doubt. But it means you’ve never seen anything in his handwriting?

CLINTON:  Or his signature?

ANDRE:  Of course not.

CLINTON:  Don’t lecture me, sir! So, in short, you have no idea is this is all genuine or a Yankee trick! If you want to spend ten thousand pounds of government money and risk our entire army in the north, you are going to have to do better than that.

CLINTON:  Oh. So now I’m to depend on the word of a commercial traveller from New York?

ANDRE:  Well what else can we do? Unless you want me to go and meet him.

ANDRE:  Oh, I don’t know, sir. It wouldn’t be too difficult to arrange. It needn’t last long.

CLINTON:  It would be far too risky. If you were caught you’d be shot as a spy.

ANDRE:  There would be no need to run that sort of risk. A quick meeting, check it’s Arnold, settle a price and home again.

CLINTON:  I am not having my adjutant general gallivanting around behind enemy lines and that’s final.

CLINTON:  Send someone else.

CLINTON:  What do you mean, there isn’t time?

ANDRE:  We must take the fort before the Yankees start getting suspicious. Someone is bound to have started asking awkward questions by now. That means we have to settle Arnold’s price and fast. The only two people who can authorise that sort of sum are you and me. Of course, if you don’t mind going –

CLINTON: (He sees there is no alternative.)  All right.  I don’t like it, mind.

ANDRE:  I’ll get a message to Stansbury.

CLINTON:  Wait. I’ll let you go on three conditions and three conditions only. Understand? One: you meet Arnold as close as possible to our positions. You do not penetrate behind enemy lines and above all you go nowhere near the fort. Two: you remain in uniform at all times. Under no circumstances whatsoever are you to put on civilian clothes, not so much as a cloak. You will treat wth Arnold as a British officer: I want none of your play acting. Three: you will receive no, repeat no papers, letters, plans or anything of that sort. Those are my strict instructions. Is that quite clear?

CLINTON:  All right. I’ll get on to the navy about getting you a boat. 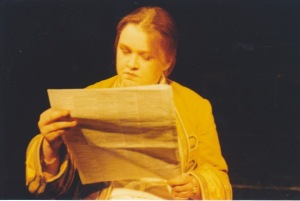 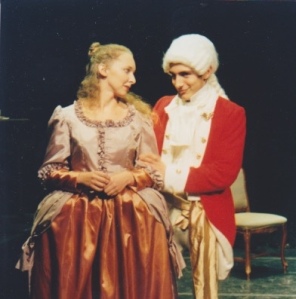 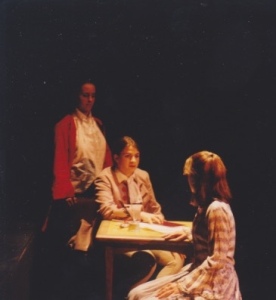 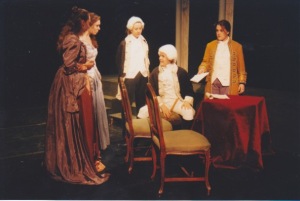