Cambridge 1918.  As the Great War draws to its end a new and deadly danger stalks the streets of the ancient university town – the Spanish Influenza. But when Eric Milner-White, Dean of King’s College and recently returned from the Front, utters a prayer for the soul of one of the victims, he unwittingly revives a long dormant spirit with a long-held grudge against the college and the power to exact a deadly vengeance. Can the Dean solve the problem of the mysterious puritan girl who has appeared in the glass of the chapel?  A Cambridge ghost tale for Christmas, with a gripping and terrifying climax.

The Girl in the Glass will be produced by the Combined Actors of Cambridge at the ADC Theatre, Cambridge, in December 2018. Further details are available here.

MILNER-WHITE:       William, look at me.  You know the difference between right and wrong, don’t you?  I want you to think of everyone who has taught it to you: your mother, your father, your vicar, your Sunday School teachers.  They have all told you how important it is to tell the truth at all times.  Now tell me, on your honour, did you steal this postal order?

MILNER-WHITE:       It seems unlikely he would incriminate himself, don’t you think, Phipps?  If he had really done it?

MILNER-WHITE:       William, that postal order found its way into your bag.  There are only three ways that can have happened.  Either D’Everard put it there, which I don’t believe, or you put it there, or someone else put it there.    Now, if it wasn’t you, it must have been someone else.  We all know that you have had your differences with Fleetwood and no-one is blaming you for that.  Are you saying that Fleetwood put it in there?

MILNER-WHITE:       William, I am deeply disappointed in you.  Theft is an abominable thing.  It is a low, sneaky type of sin.  It is not the conduct of a gentleman.  I had hoped that your mother – and your father – might be proud of you.  You have let them down, just as much as you have let me down.  I am afraid I have no alternative.  You are expelled.  You must collect your things and leave the school this afternoon.

(WILLIAM makes for the door but stops to speak)

MILNER-WHITE:       When I was in the infirmary, I sat with each afflicted boy and with Phipps.

MILNER-WHITE:       The thing is, each boy mentioned something to me.  Quite without prompting.  And, I firmly believe, without any collusion between them.  They are in no fit state for anything of that sort, I assure you.

MILNER-WHITE:       They said that when the illness first struck them – they were in their classroom – each of them saw a girl standing in front of him.

MILNER-WHITE:       They said she didn’t say anything, just looked at them and smiled.  Not a pleasant smile, you understand.  They described it as – well, a very odd smile.

MILNER-WHITE:       No-one knew.  She only appeared for an instant and then she faded from their eyes.

MILNER-WHITE:       Here’s the curious thing.  Each of them described her exactly and each description was the same.  She was a young girl, dressed in a black dress, with a large white collar, and a white bonnet, just like –

(They are now in the chapel.  Lights come on to show stained glass windows.  JEMIMA stands in the centre of the glass.  Her mouth is moving, as if she is speaking, but no words come out.)

MILNER-WHITE:       How indeed?  But you see – she is dressed exactly as the boys described.  A puritan girl of the seventeenth century. 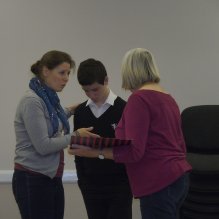 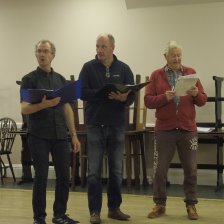 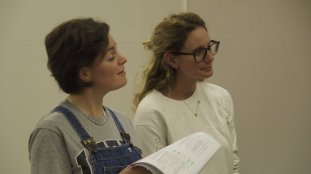