I’M BACKING BRITAIN tells the story of the “Backing Britain” movement that swept the country in the first few months of 1968. The story began in Surbiton, and I originally wrote the play for the oneACTS festival in Surbiton. Then I expanded the text and this expanded version is available in the collection Dramatic Shorts Vol.1 edited by James Quince. However, the play was edited down slightly for the Cambridge Drama Festival and the Edinburgh Fringe Festival, to fit within their time limits; this amended version lasts about 55 minutes, so if you are thinking about putting the show on, get the text in Dramatic Shorts and then contact me and I can advise on editing it down.

I can remember the stickers and badges from the Backing Britain campaign, but I was only seven at the time and I had no idea what they were about, still less that it was a story that had started near where I lived. What happened was that the British economy was in one of its periodic periods of crisis – Harold Wilson had just devalued the pound – and at a heating engineering firm in Surbiton, called Colts, the managing director suggested that if everyone worked an extra half an hour a day for free productivity around the country would soon rise. A group of young typists took him at his word and found themselves at the head of a movement that caught the nation’s imagination. It got a slogan – I’m Backing Britain – and a logo – the union jack with the slogan written across it – and soon celebrities were queueing up to endorse it and the whole country seemed to be behind it. But gradually the wheels began to fall off.  The trade unions objected to the idea of working overtime for free, Robert Maxwell attempted to hijack the movement and turn it into a protectionist “Buy British” campaign, and the idea of flying the flag and backing Britain was also hijacked by the National Front, which was launched in 1968, the year of Enoch Powell’s famous “rivers of blood” speech.  The final blow to the movement came when the press revealed that the Backing Britain T-shirts had actually been made in Portugal.

In the play I have fictionalised all the characters and the name of the company. I show the story through the eyes of the decidedly dodgy tabloid press, who treat it as they would any news story. First they pinch it from the local press; then they big it up, give it a slogan, get the celebrity world involved; then they stir in a bit of controversy; then, when the story goes through its inevitable wobbly period (when the girls themselves find it hard to keep the campaign going), they have a go at turning the story into something more sexy and when that doesn’t work they kill it. This is a play about the way we absorb stories from the press as much as it is about the Backing Britain campaign itself.

I’M BACKING BRITAIN was first performed at Anglia Ruskin University, directed by Bryony Webster. It won awards at the Cambridge Drama Festival and then moved to the Edinburgh Fringe, where it attracted good audiences and a couple of very positive reviews. The play evokes the whole era of the sixties, through the fashions, the music and the news. Certainly the audiences in Cambridge and Edinburgh, some of whom confessed to remembering the period, found that it brought back a lot of memories. 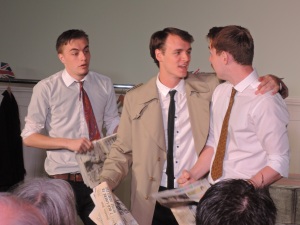 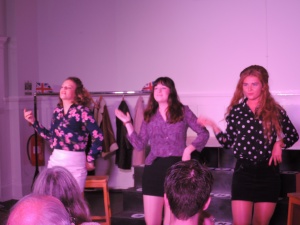 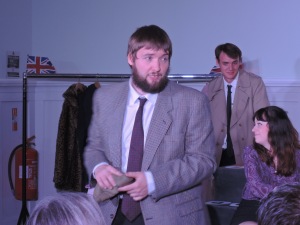 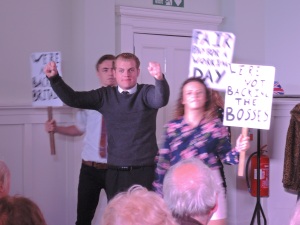 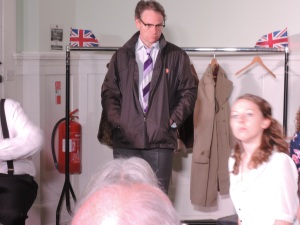