There is no more controversial figure in the Great War than Field Marshal Sir Douglas Haig. His reputation has been so heavily attacked, as a heartless butcher sending men into battle against impossible odds, that it can be difficult to appreciate what a national hero he was while he was alive. Moreover, historians have more recently not only salvaged his reputation and shown that, while he undoubtedly made mistakes, he was a far better and more successful commander than his critics have recognised, but they have turned equally savage scorn on some of those critics, accusing them of amateurishness, ignoring evidence and straightforward prejudice.

The decision in 1916 to launch a British mass attack on the Somme, rather than the joint French-British attack that had originally been planned, or the British attack in Belgium that Haig preferred, is the subject of this, the third play in the Great War cycle. 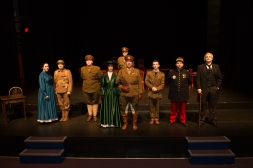 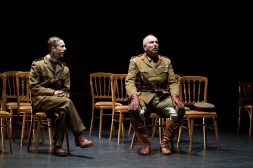 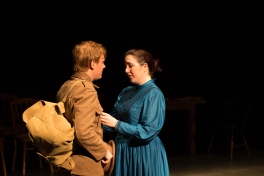 SASSOON:            I’m essentially a civilian, you understand and I don’t always follow the strategy, but I must confess I don’t fully understand the purpose of this offensive.

SASSOON:            If the men attack the German trenches, and if we assume they take some of them, then what? The Germans will just counter-attack or dig in a little further back.  I don’t see why they should move a single man away from Verdun.  Even if they did: what then?  The French hold onto Verdun; we hold onto our position – at least I hope we do: we all end up exactly where we started.  It hardly seems worth it.

HAIG:                      The Somme area has rolling uplands and the Germans have the high ground; we must anticipate heavy losses.  Those men are in my care, entrusted to me by God and by Mr Asquith.  If they are to fall on the field of battle, I shall make sure it is worth it, Sir Philip: you may rest assured of that.

DUNCAN:              Certainly whoever starts a war bears a heavy responsibility and will answer for it at the end.

SASSOON:            Such a far-reaching decision would need the approval of the whole Cabinet.  And of the King.  And you haven’t got it.  Have you?  In fact, I don’t think you’ve even mentioned it.

LLOYD GEORGE:   What would you know, Sassoon?

LLOYD GEORGE:   What about it?

SASSOON:            Posted yesterday in Salford.  Delivered to the Front Line the next day.  Quite remarkable, really.

LLOYD GEORGE:   So we have a splendid postal system.  Hurrah.

SASSOON:            Have you ever thought of the logistics?  The organisation?  To get letters from all over the country delivered to men in the middle of a war and all within a day of their being posted.  Collecting, sorting delivering – it’s quite awe-inspiring, don’t you think?

SASSOON:            You know what my point is, L-G.  You better than anyone.  That’s the power of the State for you, isn’t it?  The enormous, all-embracing power of the modern State.  And that’s just the postal service.  We’ll add in the railways, shall we?  And the coal mines.  And the shipping lanes.  And the omnibuses.  And everything else that goes towards making sure there are eggs on the table at breakfast and post on the doormat and clean uniforms and iron rations and ammunition and bars of chocolate for the men.  The modern state is a formidable thing, and it will crush anyone who gets in its way.

LLOYD GEORGE:   I haven’t got time to listen to this.

SASSOON:            You see, that’s just England.  You’ll find the same in France.  The same in Austria.  The same – why, much, much more – in Germany.  And you knew that.  You knew that back in nineteen fourteen.  When you took us into this war.  You and your Cabinet colleagues who are, apparently, so superior to the rest of us.  You knew we had a tiny army compared with the Germans.  Or the French. You knew it would cost lives on an unimaginable scale.  Why else did Kitchener have to recruit so many men?  But still you went ahead.  Still you took us into the war.  And still you demanded results. Over by Christmas.  Over by the New Year.  Victory, breakthrough, smash the Hun, just don’t lose too many men.  It doesn’t work like that, L-G.  Because this is modern war.  Twentieth-century war.  What is it you like to call it?  – oh yes, ‘total war’.  We’ve got bigger weapons, you see.  And more efficient ways of killing – you’d be amazed at the variety of ways we have of killing hundreds of people in a matter of seconds. It’s lethal stuff, this total war of yours.  Look at you. And Asquith and Churchill: frock-coated, top-hatted, impeccably dressed, but my God you’re deadlier than any general.  We’re all just trying to keep up with you.  And if it costs thousands and thousands of lives, it’s because we’re still learning how to.  So, don’t go blaming the generals, LG, not even Sir Douglas.  If you want to know who is to blame for this appalling bloodbath, I am sure we can find you a mirror. 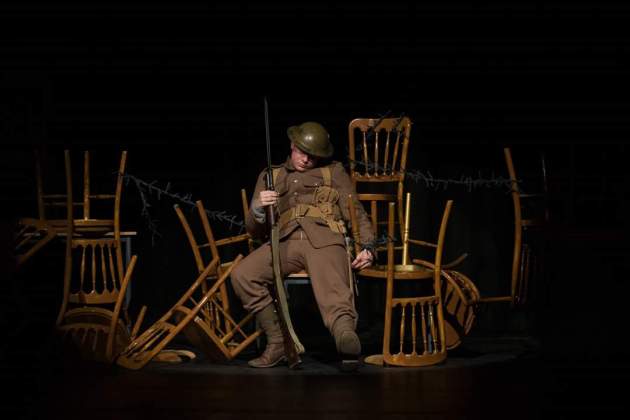